This gallery is devoted to my latest challenge which is illustrating my book, Curiosity killed the Cat – Well Almost.  The book is about a wild Tefe Green discus (a disc shaped tropical fish of the chiclidae family which originates from the Amazonian rivers) and how it makes it’s way into a tank in the UK.  Meanwhile, its female partner, a very much sought after strain was being rescued in another tank set-up.  This new strain was called The Pigeon Blood and it was developed by Mr Kitti Phanaitthi in Thailand.  He is a household name in the discus world and has completely changed our view of this species from 1991 to the present day.

Partly based on a true story, the Pigeon Blood was rescued by me, it was the best survivor out of an expensive two dozen.  With my kind consideration and generosity, I returned this fish to the breeder, Mr Steven Punchard, who paired it off with a Schlingmann.  We called the babies, Sunset Tigers which shocked the discus scene back in 1995, it was a name dreamt up to attract and it did just that.  Today, many Asian discus breeders are naming their fish after animals, foxes, bats, leopards, zebras etc.

As the titles suggests, I was chasing the discus hobby for nearly six years with the aim of growing a plate size discus fish to feed my nagging husband.  It is written with humour, let’s say, I am trying to pour out the madness in me, the idea for this book was bottled up for seven years.

It feels so strange that I have done the full breeding programme, growing some two inch discus fish to become parents and then growing their fry on to become fine specimens and these become parents raising the next generation etc.  Next I had to imagine living the life of a discus fish for my writings and now I am trying to depict their livelihood, paying more attention to their emotional behaviour which, in my opinion, is not fully portrayed in the textbooks.  After the first painting here below, I do not do any more preliminary sketches, I dab a few colours onto canvas, giving off a very abstract start, then just let my imagination for the backgrounds take over.  I hope you, too, find my depictions fascinating and interesting.  Most say that the discus fishkeeping bug is hard to wean off, I can believe it because I still don’t understand it even now, 11years later.  I am approaching it from another angle, it’s like bringing their wild habitat home and I am creating my own tank set-ups in two dimensional form.

I will attach extracts from my book to describe the illustrations.

I may use this for the Front Cover unless I come up with another just as pleasing. 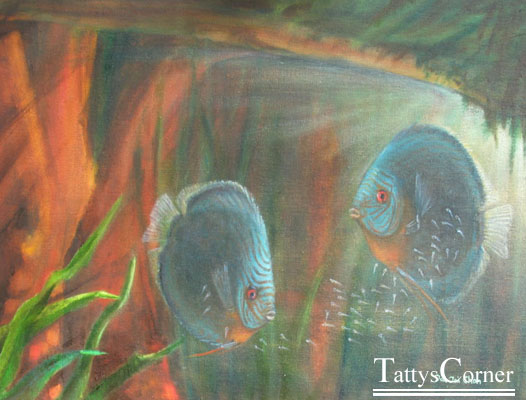 “The tails of the larvae were getting bigger and longer, all wriggling in sequence.  Both parents took turns to protect and guard.  They have not eaten for six days, though hungry, they did not have the heart to eat their offspring.   Now and again, one of the wrigglers would come off the bark and try to swim away, but both parents were alert and caught it in their mouths and blew it back onto the bark.  But as the hours passed by, their bodies were turning very dark and the wrigglers were coming off the bark by the dozens.  Some were finding themselves on their parents’ backs but there were so many on the loose that the pair could not keep up gathering.  Geronimo’s eyes were rotating furiously and he must have about six in his mouth already.  She was a few inches away trying to retrieve the stray ones, at least eight because her mouth was bigger.  Eventually, most if not all the babies found themselves nibbling the milky secretions off the sides of their parents.”

These are my preliminary sketches for that cover piece.  I was trying to get the feel of the colours on the wild fish, almost drawing in each scale on their skin and their shapes, yes my discus crazy friends on the discussion forum of the Discus Page Holland site, pointed out to me that there is a difference between the female and male form.  I had overlooked this, my concentration was so intense, I had forgotten.  Maybe I am getting old and my memory is failing me. 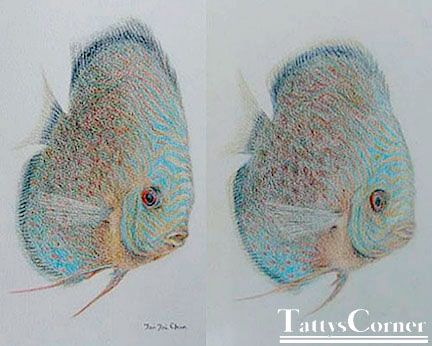 This is where the pair of Tefes are taking turns to feed their fry. I want to show you the preliminary sketch for the background and the finished painting. Underneath is the extract from my book to describe it.

“The babies were constantly feeding, their tiny bellies were grey, filled with milk and they were getting bigger.  Though both parents have not eaten much but they were glad to see the odd river shrimp, and they ate a bit of algae off the barks.”

Here are the stages of development of a piece and an extract to describe my intentions.

This is the end product 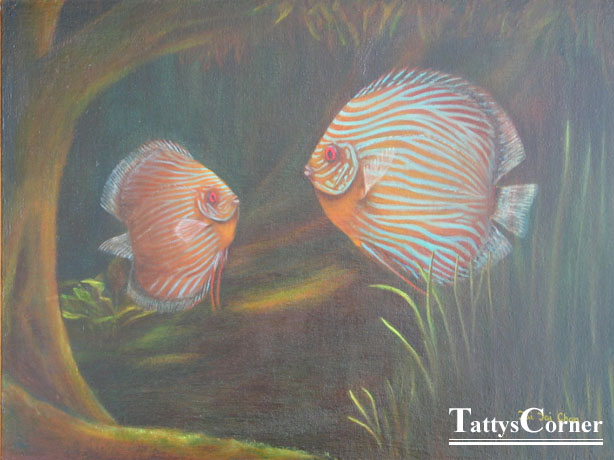 “She read that wild discus usually bred in the rainy season where the forest submerged and only the tree tops were visible.  The vast undergrowth also became submerged thus providing a variety of foods for the newborns.  Most of the adult discus swam away from the swift flowing Amazon.  They swam towards the creeks or igarapes where the water was cooler, shallow and slower flowing.  Submerged under water were a mass of inter twining branches, trunks and plant roots that helped to provide them with the security and protection.  Here, they set about to breed the next generation of discus and she imagined them finding a spawning substrate very close to each other in a similar depth where the water parameters was the same.  Within the close vicinity, in full view of each other, they would spark off with the release of their hormones coupled with a change in water temperatures.  The low atmospheric pressure may be due to the sudden change from the dry season to the rainy season and subsequently in between bouts of heavy rain where it cooled the atmosphere as well as the water where it fell.  These downpours lowered the water temperature which also triggered them to spawn. Constant new pairs formed and each found their own spawning spot on a fairly smooth piece of tree bark or a leaf.”

This is where the male star of my book finds his first love in the Wild so we have a pair of Tefes bonding.  Prior to spawning, all pairs perform a ritual, a sort of mating dance with both fish swimming upwards then downwards, a lot of bowing motions, where their eyes are focused intensely on each other.

“He was dreaming about the time when they met under the submerged trunk of that gigantic tree.  The setting was so romantic.  The water was warm, dark and rich in humus, a bit like plain stale tea.  Geronimo was getting on his second year and it was about time he found himself a wife to continue his blood line.  And there she was, and she was the most beautiful creature that he has ever seen.  Her eyes glowed like rubies, her lips were pout and kissable.  He found these highly irresistible.  Her beauty completely mesmerised him.”

Here, when I started with the browns, I was thinking of the decaying submerged undergrowth as we are further into the rainy season. 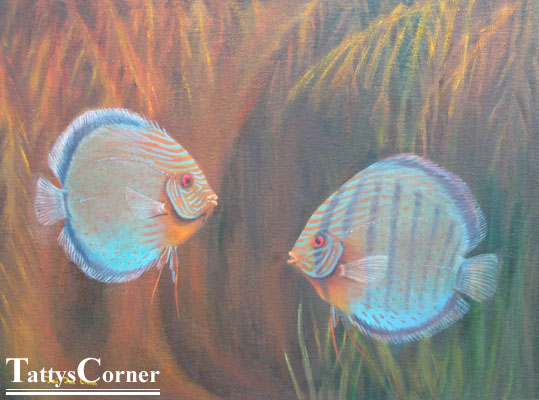 Throughout the Amazon, all the pairs would go through a mating ritual, a dance performed prior to spawning, almost like the Last Tango where each partner had eyes only for each other. She could almost imagine these pairs dancing to the jungle music sometimes interrupted by the wailing of a howler monkey or some exotic bird screeching. Each family of discus would dot the submerged tree barks within viewing distance of each other and the dominant pairs would take the best spawning spots. They would have invisible dividing lines and when this border is crossed, one partner would fight hard to protect its family. So not only they danced in tune with the lingering jungle sound but the battles rhymed in as well.

The next piece is an easy one. 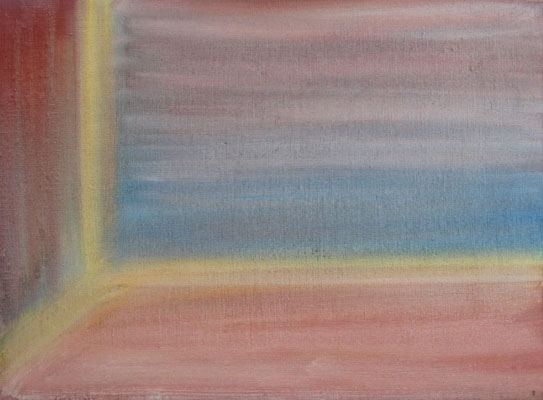 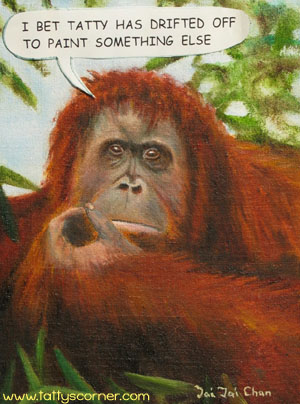